What You Need To Know About Plain View, Expedient Circumstances, and Hot Pursuit

But the plain view doctrine, it’s fairly regularly used by police officers. If the cops are just walking down the street and they look into your front window and they see you snorting cocaine and as plain view, they’ll probably just to cover all their bases, they’ll get a search or an arrest warrant. That’s probably what they should do, but they can at least go up and walk to your front door and then knock on your door. And then even right there, if they see the cocaine on the table, then it’s kind of downhill from there. The second legal doctrine is going to be what’s called exigent circumstances, so exigent circumstances is kind of going to be, again going to our cop that’s walking down the street. If the cop is walking down the street and he hears someone screaming, “help me, help me”, From a house or an apartment, that police officer can then kick the door down and try and assist that person because it’s an exigent circumstance.

If that police officer looks in the 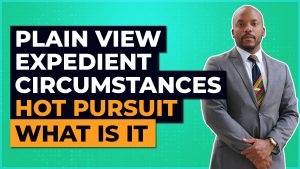 front window of someone’s house and see someone about to get murdered, it’s common sense that we would want that police officer to be able to assist that person in receiving protection from the person who was trying to murder them. I think that’s common sense on its face that the police can actually use a certain means to protect the general public from danger, that is right there in front of them. The last legal theory is going to be what’s called hot pursuit. Again, going back to the movie American Gangster, towards the end of the movie, there’s the scene where they’re breaking into the drug house or whatever. They have all the women that are there and they’re cutting up the heroin. They have the body guards or whatever at the doors. They run in and one of the guys runs out and the lead detective chases him down five stories of the building and then through like four or five different individual apartments and stuff.

That could be not a good example of the hot pursuit doctrine, but it should suffice. Basically, it’s the thinking of when you see someone that is committing a crime and then they subsequently run away from the police, the police can pursue that person under the hot pursuit doctrine. It has to be hot pursuit. It has to be like you saw that person right then and right there commit a crime and then they’re running from you. It can’t be you waited 30 minutes and then you started to chase the guy. No, it has to be hot. Now, there’s some question in the law as to how much of a time span there is and things like that, but just as a general premise, if the cops see you committing a crime and then you run away from the cops, the cops can chase you.

It’s cool. It’s highly questionable to the extent that is portrayed in movies, if that would still fall under hot pursuit, where you’re putting the general public potentially at risk from not only the assailant that you’re trying to apprehend, but also from yourself when you’re shooting into people’s homes or you’re mowing down cars on the highway and all that kind of stuff. That’s questionable and that’s probably going to open up the municipality to later subsequent lawsuits, but it serves as a good general means of depicting the hot pursuit doctrine. Go ahead and reach out to us at the email address or the website that you see in the comments or give us a phone call and you guys have a good day.

Your free ebook is on its way.

In the mean time, join our facebook group to stay up to date on the latest changes in Oklahoma law.